Try Telling a Tale About these Two Cans 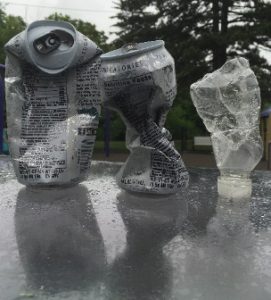 Once upon a time there were two twisted cans that were all bent out of shape with the way the world was going. They drugged themselves silly with synthetics( see list outside can), listened only to heavy metal music, decided to hang around trash and could never revigorate and recycle back into life, since nobody bothered to help them out and put them in the right place.

There were others in similar situation who lay around the park. Mr “Screwed up Plastic” hated heavy metal, walked upside down on his cap and could not open up to anybody. He felt emptiness in the way his life had evolved and was hoping to start anew.

One day a man walking a dog thought to himself. ” I could make a difference in somebody’s life! ” He picked up the out of shape and out of mind empty products of our culture and put them in their place – a recycling trash can.

It was a dark and smelly place and the three were quite unhappy. The man shouted down the hutch – “One day you will be whole and fulfilled again! Trust me”.

And then the police descended and took the man and his dog away because they found him speaking to a trash bin. The lesson? – It is mind over (recycling) matter – about the the cans and canknots ,- and lastly – recycle but do not speak to the trashcan.

Wisdom through the Sages